Serverless computing, commonly known as Serverless, has become a buzzword in the cloud-native field. It will fuel the next wave of development in cloud computing after IaaS and PaaS. Serverless emphasizes an architecture philosophy and service model that allows developers to focus on implementing business logics in applications rather than on managing infrastructures (e.g., servers). In its paper Cloud Programming Simplified: A Berkeley View on Serverless Computing, the University of California at Berkeley presents two key viewpoints on Serverless:

Now, what is Serverless?

On Serverless, the University of California at Berkeley also gave a clear definition in the above-mentioned paper: Serverless computing = FaaS + BaaS. Conventionally, cloud services are classified from bottom to top layer as Hardware, Base Cloud Platform, PaaS, and Applications according to the degree of abstraction. Nevertheless, the ideal state of the PaaS layer is to have the capability of Serverless. Thus, let's replace the PaaS layer with Serverless, which is indicated by the yellow part in the following figure. Serverless consists of two components, BaaS and FaaS. Base cloud services, including object storages, relational databases, and message queue (MQ), are essential for every cloud provider and belong to BaaS (Backend-as-a-Service). FaaS (Function as a Service) is the core of Serverless.

The KubeSphere community has been conducting in-depth researches on Serverless since late 2020. We found that:

Framework Design of a Next Generation FaaS Platform

If we were to design a modern FaaS platform, what would its architecture look like? The ideal FaaS framework should be divided into several important parts according to the lifecycle of a function, namely, function framework, function building, function serving, and event-driven framework. When it comes to FaaS, a Function Spec defines how functions should be written; then, functions need to be converted to applications, which is done by a function framework. Container images need to be built so that the applications can run in a cloud-native environment, which is done by a function building. Once the container images are built, these applications can be deployed to the runtime of function serving to serve external accesses.

Next, let's focus on the architecture design of function framework, function building, and function serving.

To make it easier to learn function specifications during development, we need to add a mechanism to transform function code to ready-to-run applications. This mechanism needs to be implemented by making a general-purpose main function that handles incoming requests through the serving url function.

The main function contains a number of steps: one for associating user-submitted code, and the rest for common functionalities (such as context processing, event source handling, exception handling, port processing, etc.).

Let's look at an example. Assuming we have the following function code:

After being converted by the function framework, the following application code will be generated:

Before the application is started, the function is registered as an HTTP function, a CloudEvent function, or an OpenFunction function. When the registration is completed, functionframeworks.Start is invoked to start the application.

Tekton is an excellent pipeline tool that originally was a Knative subproject and later donated to the Continuous Delivery Foundation. Tekton's pipeline logic is quite intuitive and can be divided into three steps: pulling code, building images, and pushing images. Each step is defined as a Task in Tekton, and all the Tasks form into a pipeline.

There are several tools for building container images, such as Kaniko, Buildah, BuildKit, and Cloud Native Buildpacks (CNB). The first three of them rely on Dockerfiles to build container images, while CNB is the latest technology emerging from the cloud-native field. Sponsored by Pivotal and Heroku, CNB, instead of relying on Dockerfiles, automatically detects the code to be built and generates OCI-compliant container images. This is an astonishing technology that has been adopted by Google Cloud, IBM Cloud, Heroku, and Pivotal. For example, many of the images on Google Cloud are built with CNB.

With these available image building tools, how can we let users select and switch at will between these tools during function building? That entails another project, Shipwright, an open-source project by Red Hat and IBM. It is dedicated to building container images in a Kubernetes cluster, and is donated to the CD Foundation. With Shipwright, you can flexibly switch between the four image building tools mentioned above as it provides a unified API interface that packages different building methods.

Let's look at an example of how Shipwright works. Assuming we have a manifest of a custom resource Build :

strategy is configured by the custom resource ClusterBuildStrategy. For example, if we are going to use buildpacks to build an image, the ClsterBuildStrategy should look as follows: 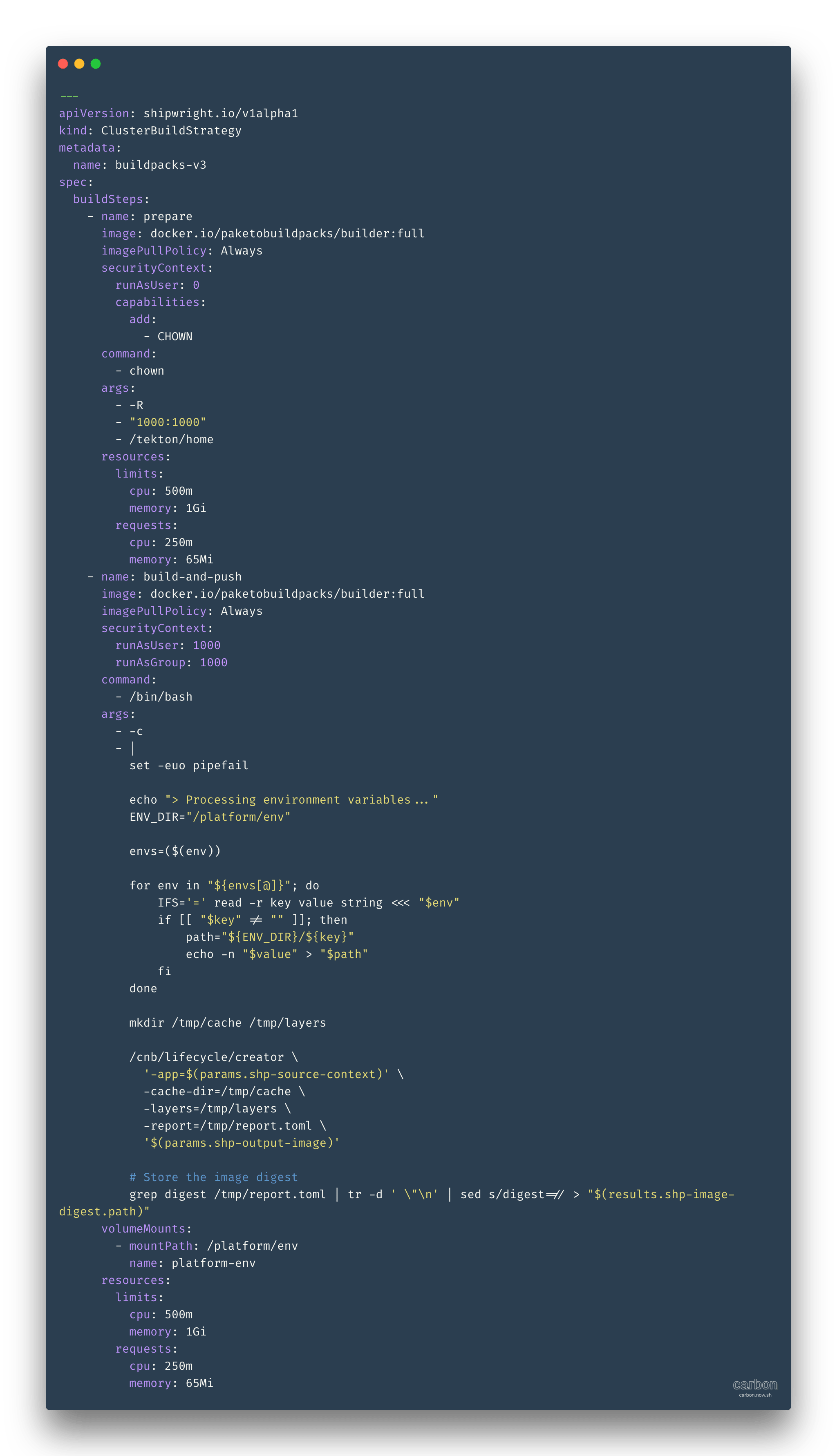 It contains two steps. One is to prepare the environment, and the other to build and push the image. Each step is a Tekton Task managed by a Tekton pipeline.

Serving refers to how functions/applications run with the ability to scale automatically (Autoscaling), either being event-driven or traffic-driven. The CNCF Serverless Whitepaper defines four function invocation types:

These four types can be summarized as follows:

Besides, Knative and KEDA have different capabilities in terms of autoscaling. Let’s look into it. When new traffic comes in, it hits the Activator first, and the Activator notifies the Autoscaler to scale the replica number of Deployment to 1. Finally, the Activator forwards the traffic to the actual Pod to implement a service invocation. This process is also known as a cold start. 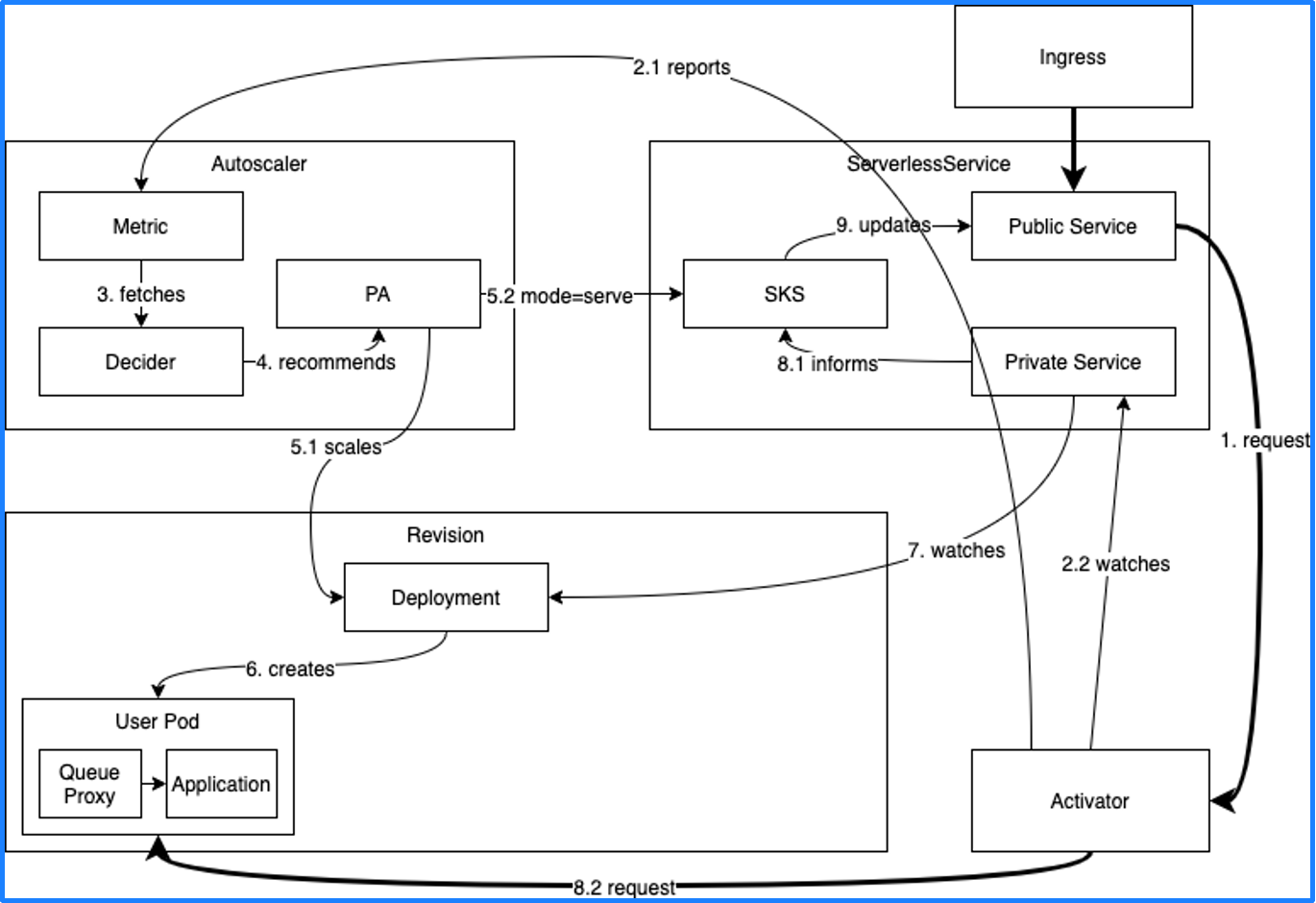 Thus, Knative can only rely on the traffic metrics of RESTful HTTP to scale automatically. In fact, many other metrics in practical use cases can also serve as the basis for autoscaling, such as Kafka message backlog. If the message backlog is getting excessive, more replicas are needed to process these messages. To realize autoscaling based on more metric types, we could use KEDA. 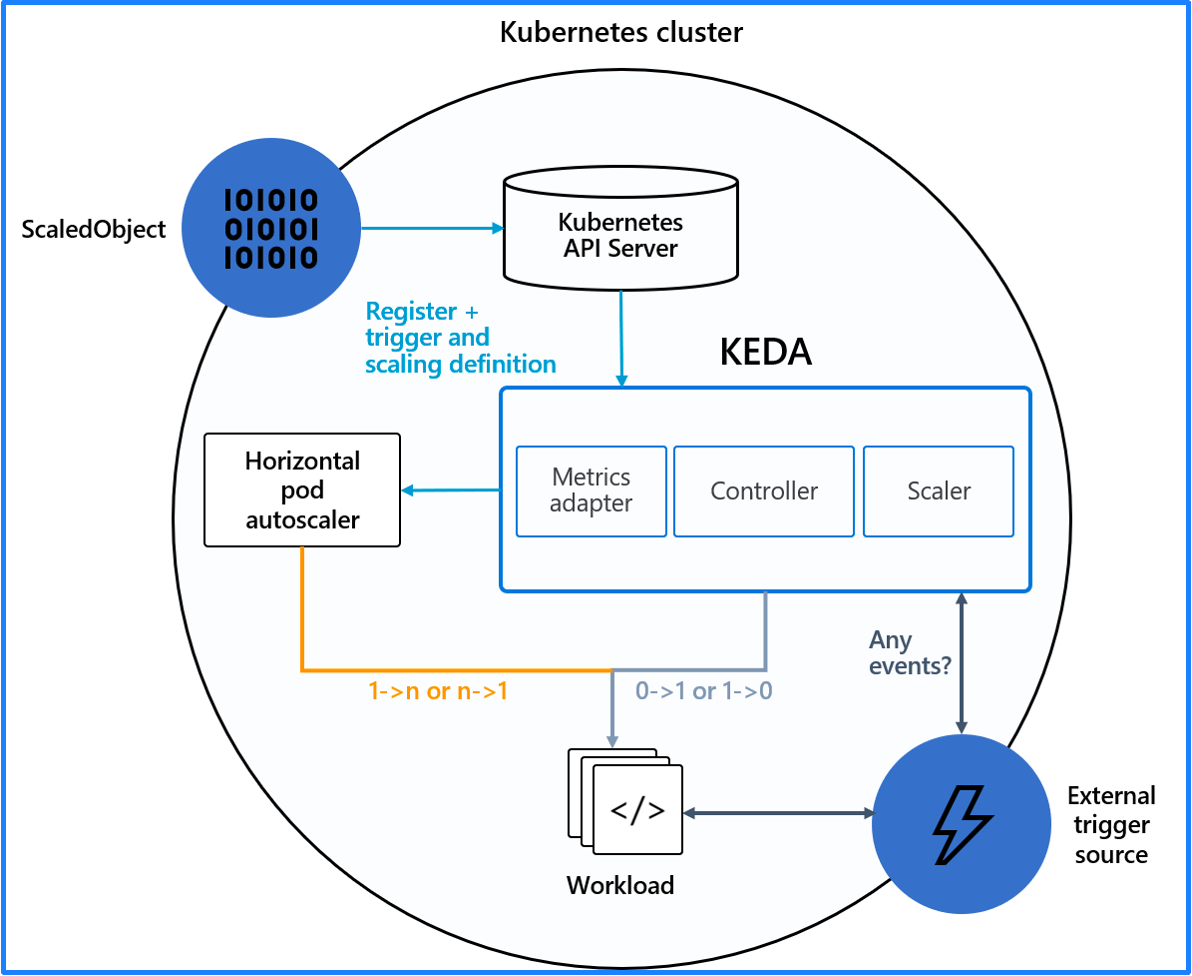 KEDA can implement autoscaling based on a number of metric types:

For example, you need the following manifest to implement autoscaling based on Kafka metrics:

The replicas scale between 0 and 10 as the metrics are checked every 15 seconds. Once the replicas are scaled, it has to wait for another 30 seconds before another autoscaling.

Although KEDA does not support autoscaling based on HTTP traffic metrics, it can be achieved through KEDA http-add-on that is a plug-in still in Beta stage. We will pay close attention to the project, and use it, when it matures, as the synchronous function runtime to replace Knative Serving.

Function computing is also a kind of distributed application that uses a variety of programming languages. For example, to let a function communicate with Kafka, Golang needs to use Go SDK, Java needs to use Java SDK, and so on. You have to write different implementations for accessing Kafka with different languages. I believe I'm not the only person who think this is troublesome.

Assuming that you have to access many other MQ components in addition to Kafka, that's even more troublesome. Why? How many implementations will be needed for accessing 10 MQ with 5 languages? 50 implementations! With Dapr, 10 MQ will be abstracted as a method, namely, HTTP/GRPC interface. Now, only 5 implementations are required, which greatly reduces the amount of work to develop distributed applications.

Based on researches on the technologies mentioned above, an open-source project named OpenFunction came into being. Its architecture is shown in the following figure.

There are 4 main components:

Want to have a look at the practical use cases for OpenFunction? Refer to Serverless Use Case: Elastic Kubernetes Log Alerts with OpenFunction and Kafka.

OpenFunction released its very first version in May 2021. It has supported asynchronous functions since v0.2.0, added OpenFunction Events with Shipwright supported since v0.3.1, and added a CLI since v0.4.0.

OpenFunction is planning to introduce a visual interface, support more EventSource and the ability to process edge loads, and accelerate cold start by using WebAssembly as a lightweight runtime and combining the Rust function.

We welcome developers to the OpenFunction community. You can raise any queries, design suggestions, and cooperation proposals regarding OpenFunction.

Want to get involved? Fork OpenFunction or join us on Slack!