Holding a brand new form, WebAssembly excels in its portability, small size, fast loading, and compatibility. Given its good security, compatibility, high efficiency, and lightweight, WebAssembly is an ideal technology for applications based on sandbox schemes. It has got noticed from communities of containers, function computing, IoT, and edge computing. What is WebAssembly? Is it capable of replacing Docker?

This article is based on the share by Michael Yuan, the maintainer of WasmEdge(project under CNCF now), in the 2020 KubeSphere Meetup. 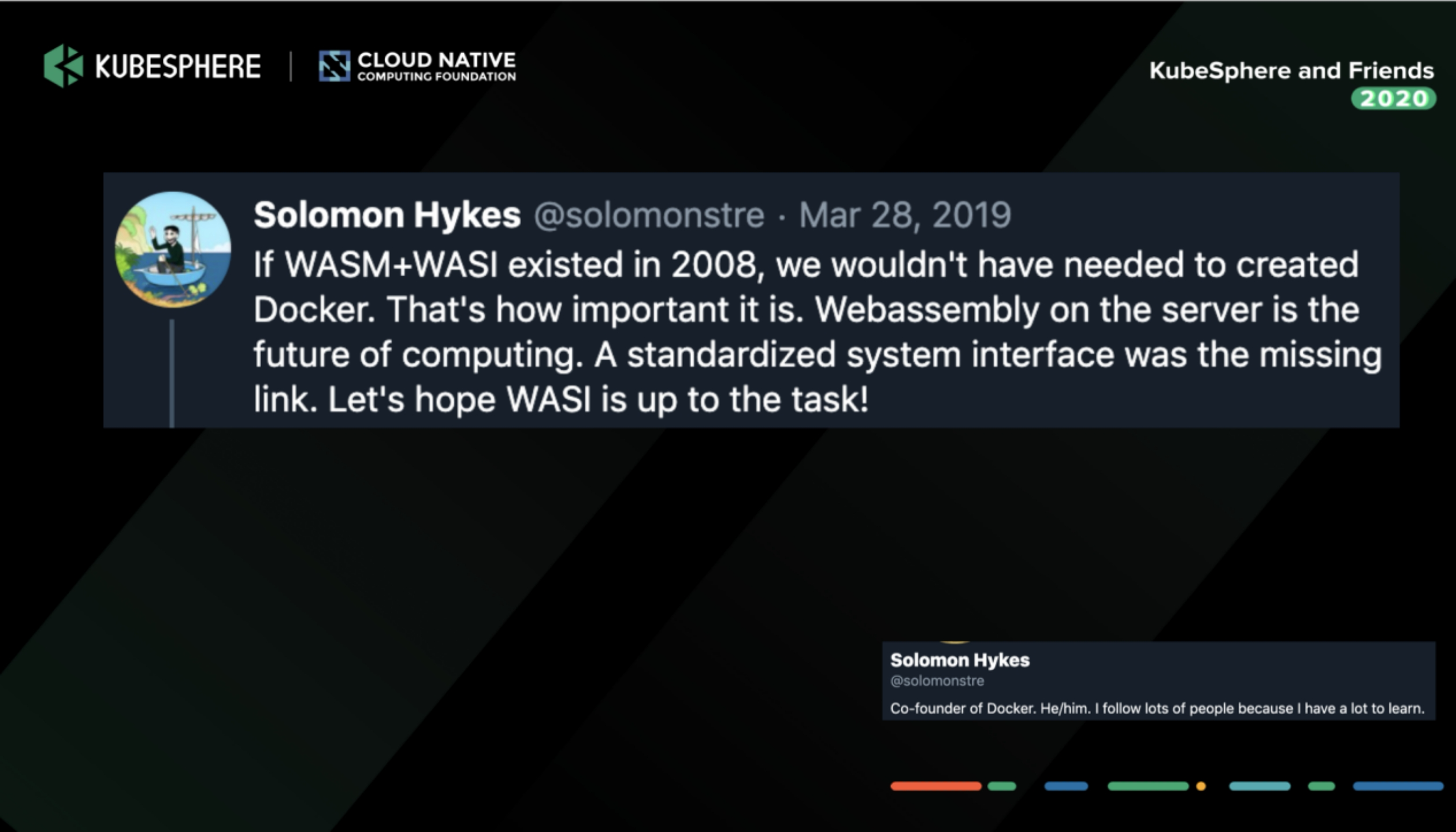 Solomon Hykes, the founder of Docker in March 2019, claimed on Twitter that “If WASM+WASI existed in 2008, we would not have needed to create Docker”. From where he stood, WebAssembly reveals the future of computing. This twitter led to a great stir in communities. Many people got confused about why WebAssembly, a replacement of JavaScript in browser for game playing, turned out to be an alternative to Docker in server.

Where WebAssembly Lies in Server 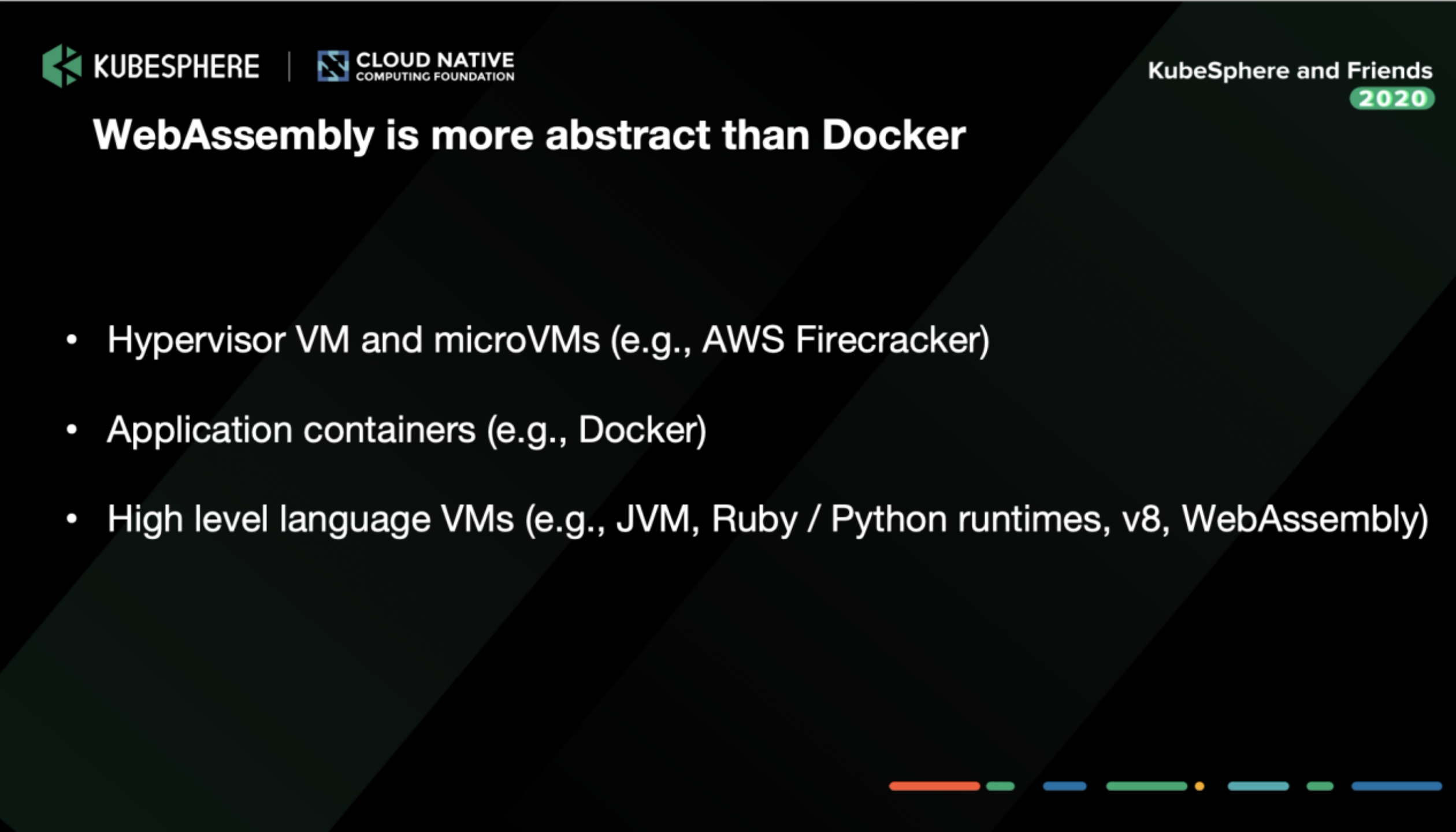 We tend to divide container, virtual machine, or operation environment into three different levels in terms of server.

If WebAssembly manages to create a language VM similar to JVM, the dream proposed by Java over 20 years ago can be realized: to provide developers with a secure and highly abstracted operation environment across different operating systems, hardware, and software platforms.

Comparison between WebAssembly and Docker 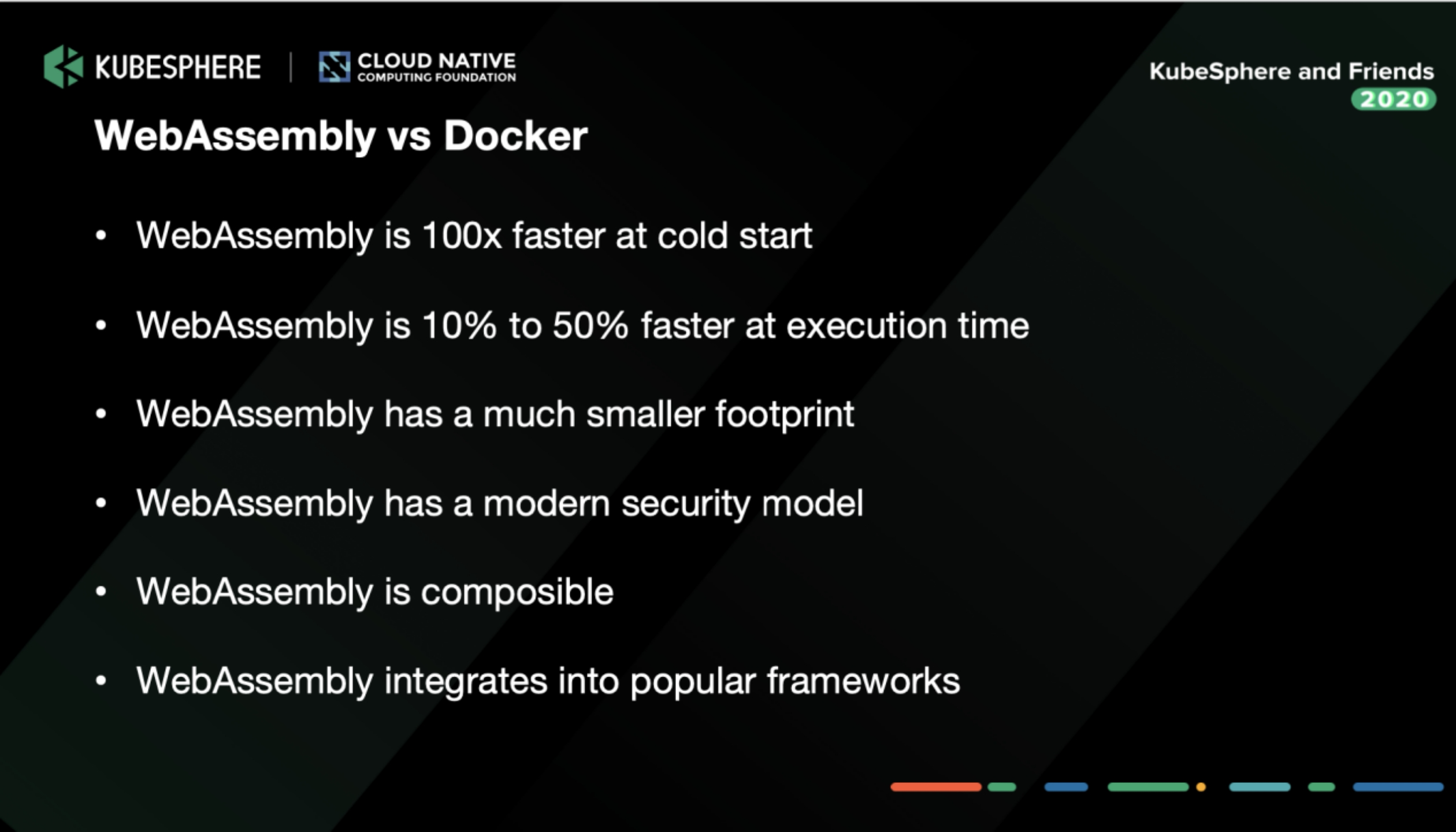 What is the relationship between WebAssembly and Docker? Why is it believed that WebAssembly will replace Docker? Compared with Docker, WebAssembly performs better in the following aspects.

Slow cold start is a long haunting problem confronted by serverless and container service. As AWS provides reserve instances, keep it hot will offset advantages brought by serverless. Reserve will lead to charge by the day, which goes against the charge by millisecond we expect. One prominent edge of WebAssembly is no need to start the whole operating system, making it 100 times faster than Docker’scold start.

WebAssembly is free from the operating system as a simple virtual machine, making its execution duration 10% - 50% shorter than that of Docker.

The applications based on WebAssembly are generally within 1MB in size, while one Docker image can be 100 or 200 MB in size.

WebAssembly enjoys its “Capability-based Security” strategy, a risk control strategy based on resources offered. Different operating system interface/resources permission provided for each independent module instance can be designated by callers when instantiating each module.

Jamstack is a modern web development architecture based on client-side JavaScript, reusable APIs, and prebuilt Markup. One JavaScript application may be supported by over 100 and even 1000 serverless functions. If we combine all those serverless functions through containerization, it will be too complex as we need to start from the network or operating system level. Through nanoprocess, the application of WebAssembly, however, helps to combine them under security control.

These are where WebAssembly stands out. 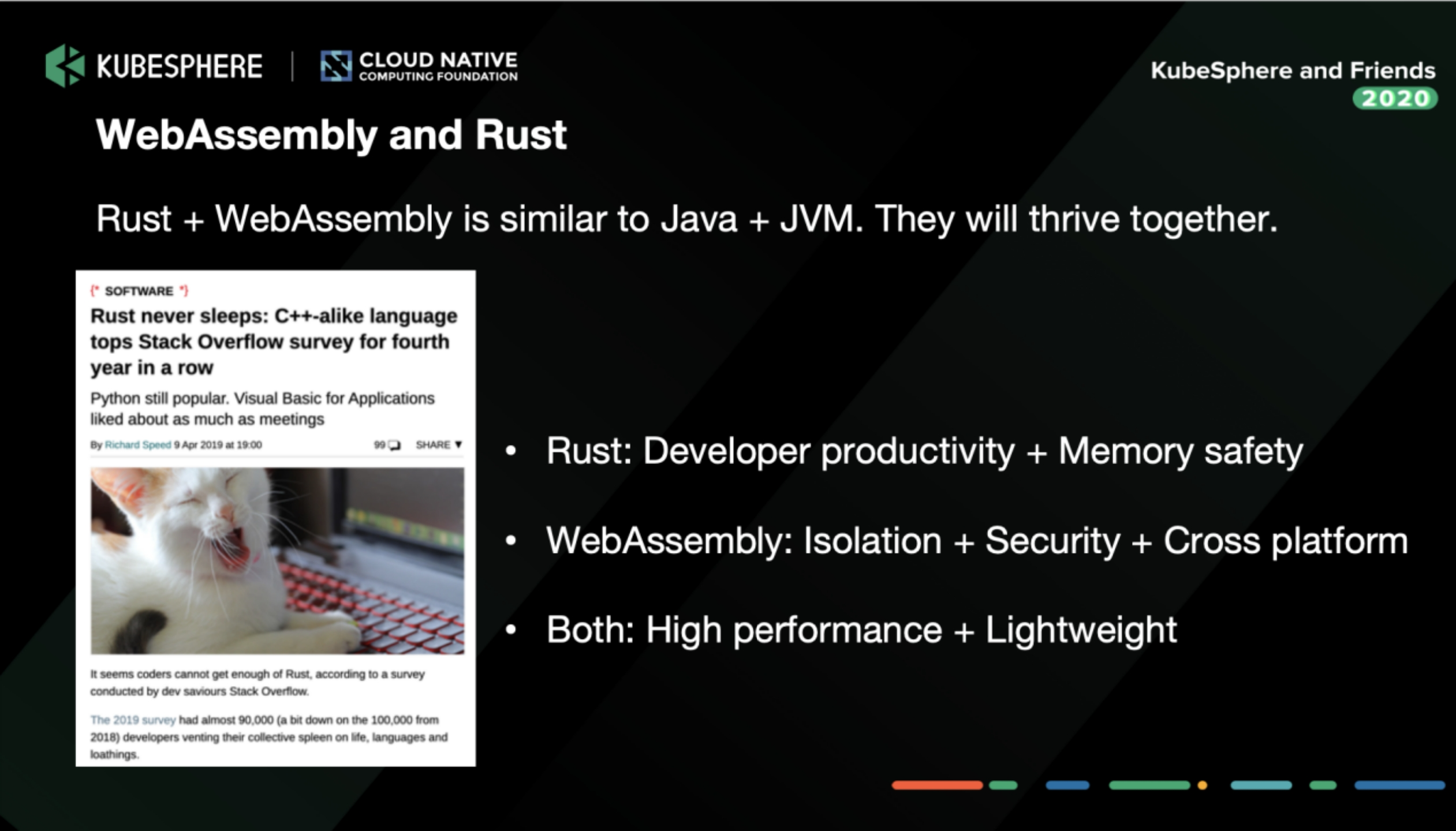 When it comes to WebAssembly, Rust always comes together. Crowned as the most popular language among developers in Stack Overflow, Rust is likely to replace C language in the foreseeable future.

As WebAssembly is connected with LLVM, 20 languages are supported at the front-end. C++ and Rust are highly supported, while Python, Java, and other programming languages with runtime are not well supported. That’s why we believe WebAssembly and Rust are perfect for each other, just like Java and JVM.

Rust improves development efficiency and security in memory. WebAssembly is conducive for secure operation and cross-platform execution. Both of them are of good performance and lightweight. 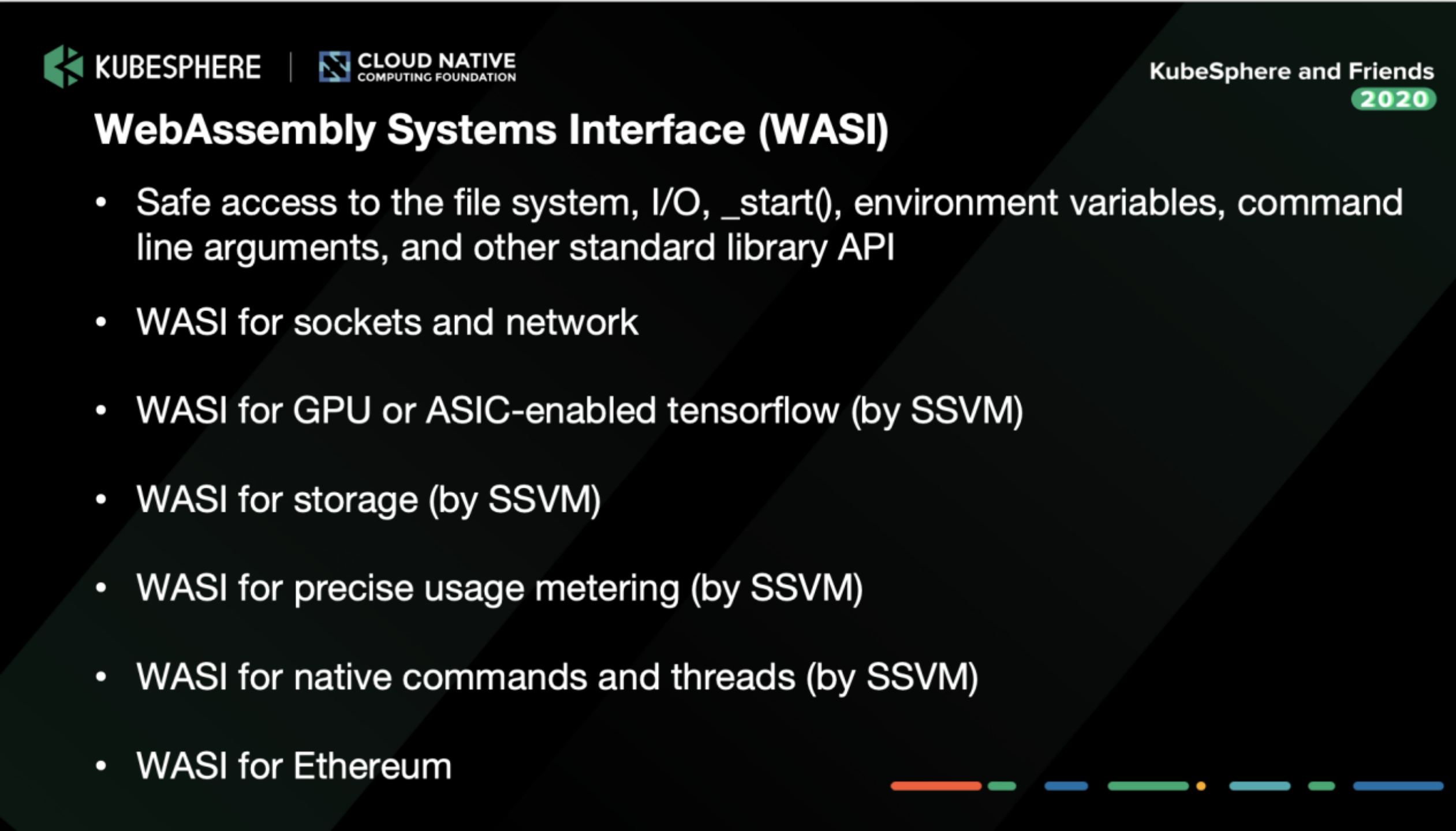 Given one significant application scenario of serverless is AI reasoning, GPU, ASIC, and Tensorflow are highly required during the runtime of WebAssembly, which are all added by WASI.

WebAssembly is frequently applied in browser, while seldom used in server, as it requires managing processes and allocating resources on its own due to the shortage of scheduling capacity and DevOps solution scheme in server-side. Hence, the combination of WebAssembly and Kubernetes makes an edge-cutting field.

One method is to make WebAssembly into OCI (open container interface) compliant. The other is to write shim API in containerd.

Now, you can use Docker tools like Docker Hub to manage WebAssembly images. 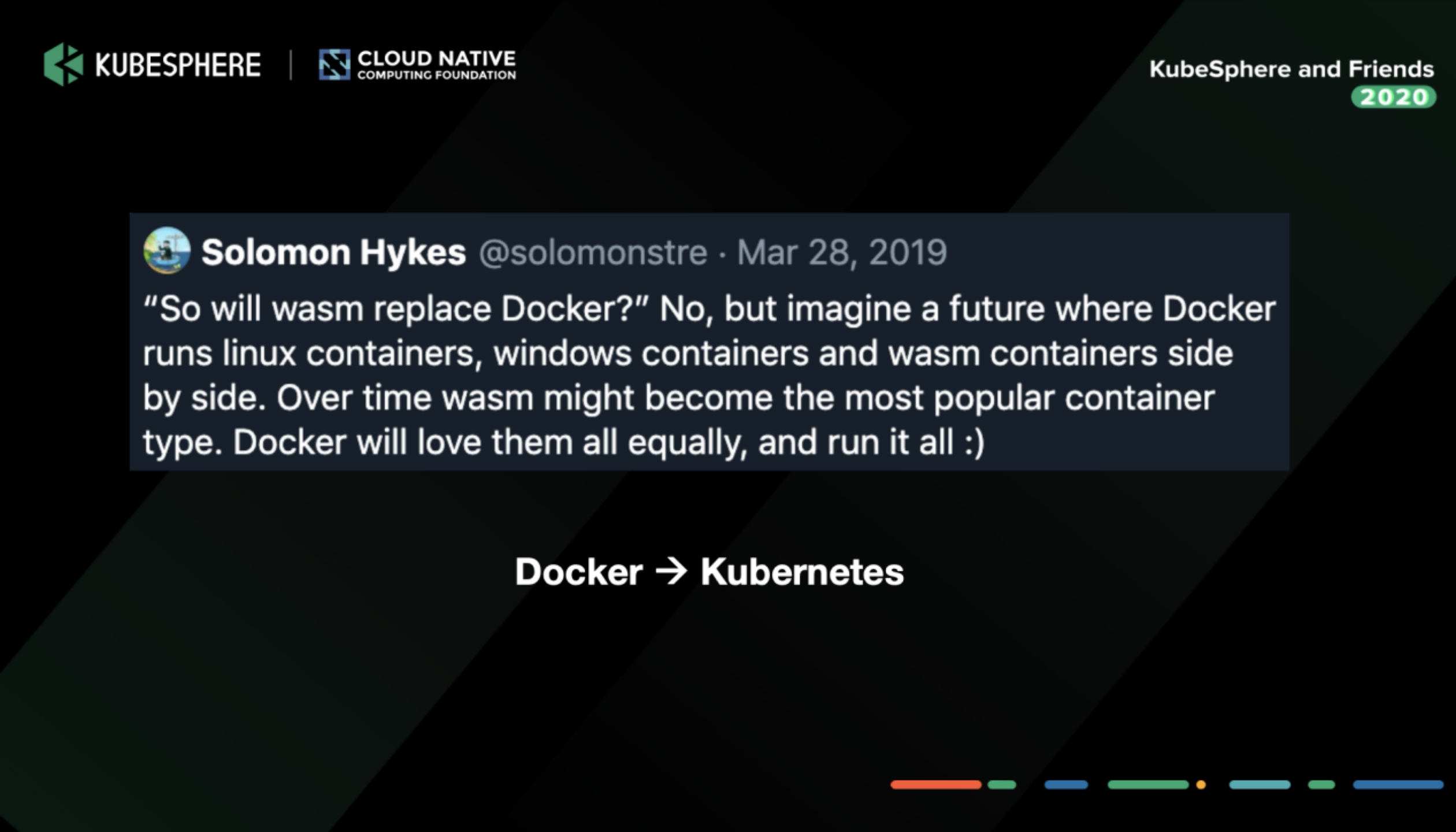 As we mentioned above, the tweet of Docker’s founder caused huge impacts on the community and led to some grudges. For ceasing these discontentment, another tweet was posted by him for an explanation. One and half years later, we found the reality different, and the word “Docker” should change into “Kubernetes”.

Even if WebAssembly can replace Docker, it takes time since Docker holds its ecology and is in a different abstraction level from WebAssembly.

However, WebAsembly will see extensive applications in some fields requiring high performance and lightweight, including micro-service, JAMStack, and edge computing.